Rip currents are worldwide recognized as a major hazard on beaches exposed to energetic waves. The American Life Saving Association and the Royal National Lifeboat Institution reported that between 70% and 80% of all rescues in US and England are due to rip currents. The victims are not only children or people with low aquatic confidence, but also adults with good swim skills have been reported as victims. Beach lifeguards usually warn beach-goers through a flag system in which red flag means that swimming is forbidden. This warning system is based on practical experience of lifeguards who can recognize severe storms and dangerous conditions potentially leading to the development of strong rip currents. So, rip currents are something to be concerned about but what are they and how do they develop? This post tries to answer to these questions.

One of the first theoretical notions that one learns about sea waves is that they are able carry energy but not water. Water flows forward under the crest and backward under the trough, so that the net balance is close to zero. However, this in not valid in the surf zone. In fact, broken waves propagate within the surf zone developing a turbulent and air-entrained front, called the roller, in which water is tumbling down from the crest toward the trough. Whereas, particles in the water column still oscillate forward and backward under crests and troughs, particles in the roller are pushed shoreward traveling at the same speed of waves. This water pushed shoreward must somehow go back to the sea.

It must be said that natural beaches are not longshore uniform but they present variations in the submerged beach bottom. This irregularity leads to an alongshore variations of the wave force: wave energy is focused on shallow bars where eventually wave breaking takes place. These areas with intense breaking are normally know as “peaks”. Water is pushed shoreward by broken waves increasing the mean water level in the inner surf zone and giving rise to longshore currents flowing in shallow waters away from these areas of intense wave breaking. These longshore currents are called rip feeders. Rip currents are seaward oriented currents that usually develop from one or more feeders through highly localized cross-shore channels that cut the submerged beach. Basically, a rip current can generate when two opposing feeders meet in the inner surf zone, or when a headland or a structure blocks a feeder that is forced to turn into a seaward flowing rip current. Rip currents are not always directly cross-shore oriented but they can also show an angle with respect to the shoreline especially during oblique wave incidence.

Summarizing, on natural beaches cyclic circulation systems develop under wave forcing. These systems are usually characterized by: 1) a shoreward water flux in the breaking zone, 2) a longshore current (the feeder) flowing within the inner surf zone, 3) a seaward water current (rip current) taking place on relatively narrow and deep cross-shore channels and 4) an expansion of the current in the head of the rip towards the breaking zone, closing the circuit. This is a ideal case that usually occurs on natural beaches, however in some cases the circuit is not closed, meaning the the water in the rip is pushed away from the surf zone leaving the rip system. Since the current system location and spacing reflects the beach morphology characterized by bars and channels, these rip currents are know as morphologically controlled. Moreover, rip currents flowing seaward through channels trigger a feedback mechanism in which erosion of bed channels is enhanced by currents. 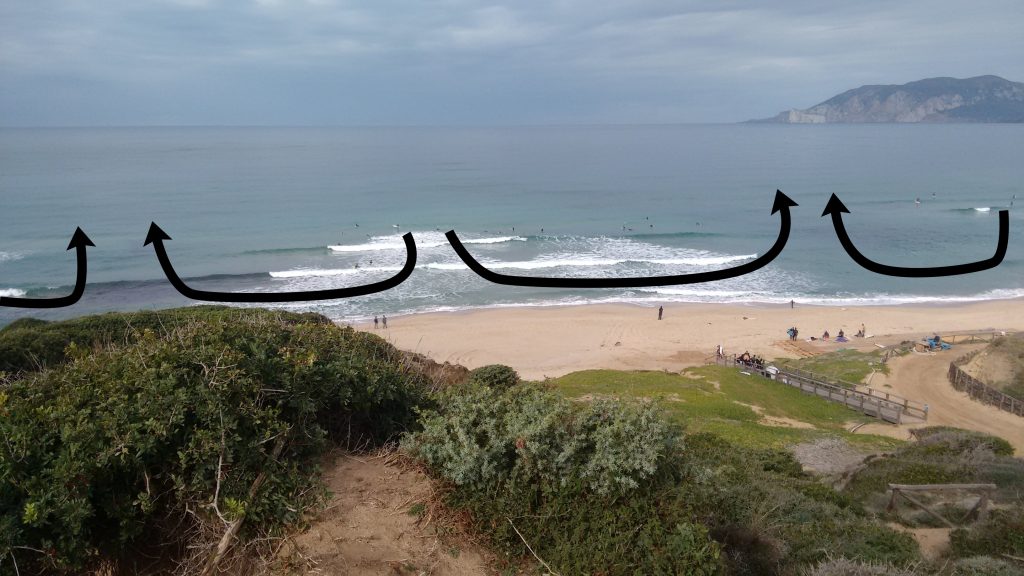 Rip current system on a beach.

Crucial question: how can one spot a rip currents? The main indicator of a rip is the absence (or a reduction) of wave breaking in a limited area inside the surf zone surrounded by areas with intense wave breaking. Because rip currents flow through narrow and relatively deep channels in the opposite direction of waves, these areas are characterized by dark patches with a rippled surface. The configuration of rip systems can be misleading for beach-goers that can think that areas with limited wave breaking are safer, actually it happens the opposite. On the other hand, someone able to correctly spot rip systems can take advantage of them. For instance, this is the case of experienced surfers that use the rip current help to save energy and reach the peak faster.

Let’s close with a curiosity. In the past years, people were used to refer to rip currents as to rip tides. For instance, in the movie “Big Wednesday”, during the last scene with the big swell hitting the beach the loudspeaker warned about the presence of strong rip tides: “Get out of the water! You are in a riptide!”. However, strictly speaking nearshore currents during massive swells are not generated by tides. Although the intensity of rip currents can change depending on the tide (stronger rip currents are usually observed at low tide), we have seen that the only rip current forcing is due to the presence of wind-generated waves breaking on a shore.