SWELLBEAT deals with wave dynamics. It makes available accurate wave forecast based on advanced numerical models. In addition, the wave calculator represents a helpful tool able to give fast solutions to a wide range of wave problems.

SWELLBEAT provides accurate wave and weather forecast within the Mediterranean basin by integrating the results of an atmospheric and an oceanic model.

The atmospheric evolution is predicted by the Global Forecast System (GFS) run by the National Center for Environmental Prediction NCEP.

The Global Forecast System (GFS) is a numerical model system predicting the development of the atmosphere surrounding the entire terrestrial globe. It is run 4 times a day by the NCEP; it provides the full range of physical variables (such as temperature, pressure, wind speed, cloud cover, precipitation,…) that drive and characterize the atmospheric evolution out to 16 days in advance. It is released with an horizontal spatial resolution of 0.25 degrees (27 km at Mediterranean latitudes) whereas, in the vertical direction, the atmosphere is divided into 64 layers.

The wind field at 10 m from the sea surface elevation computed by the GFS represents the forcing for the wave model. The wave evolution is simulated by the Wave Watch 3 (WW3) model run by SWELLBEAT. The WW3 model is run once a day and is set up to predict the wave evolution out to 5 days in advance.

WW3 is a numerical model able to simulate the entire set of processes involved in the propagation of sea wave energy, from its generation in deep waters up to its dissipation in shallow waters. The WW3 model deals with depth-averaged and phase-averaged wave parameters, involving two main implications:

This makes WW3 computationally efficient and thus particularly suitable for wave simulations over large spatial domains such as those of ocean basins characterized by a wide range of water depths.

With the main aim of simulating processes with different spatial scale evolution, SWELLBEAT adopts a multi-grid approach. The bathymetry is obtained using the ETOPO1 dataset (NOAA, 2009). A large mesh with a spatial resolution of 0.167 degrees (18 km) extends over the entire Mediterranean basin. This relatively-coarse mesh performs well in the open sea where waves are generated by wind systems with a typical extension of hundreds of kilometers and wave interactions need large fetches to transform a chaotic wind-wave sea into a mature and developed swell. Moreover, large depths prevent bottom features to significantly affect the wave propagation.
A different scenario shapes up in the nearshore where, due to the limited depths, the bathymetry plays a crucial role in modifying the wave propagation. In general terms, the horizontal scale of wave evolution decreases as the water depth decreases. This leads to the necessity of the adoption of higher spatial resolutions for properly simulating the wave propagation over shallower depths. For this reason a fine grid has been introduced in the multi-grid approach. The adopted fine grid has a horizontal spatial resolution of 0.017 degrees (1.8 km) covering the regional seas surrounding the islands of Sardinia and Corsica (we expect to cover more areas in the next future). It extends over a region between the shoreline and 22 km offshore where boundary conditions are imposed accordingly to the wave field computed over the coarse grid. To avoid pronounced grid-boundary concavities located at the middle of large gulfs, the grid width extension is increased in these areas (see, for instance, figure 1 that plots the coarse and fine grids over the Asinara Gulf).
Summing up, the multi-grid approach has been chosen with the main purpose of combining a reduction of computational effort with an accurate wave description in coastal waters. The reduction of computational effort is achieved by using the relatively-coarse grid over deep and open seas; whereas the fine grid is introduced to simulate the nearshore processes. 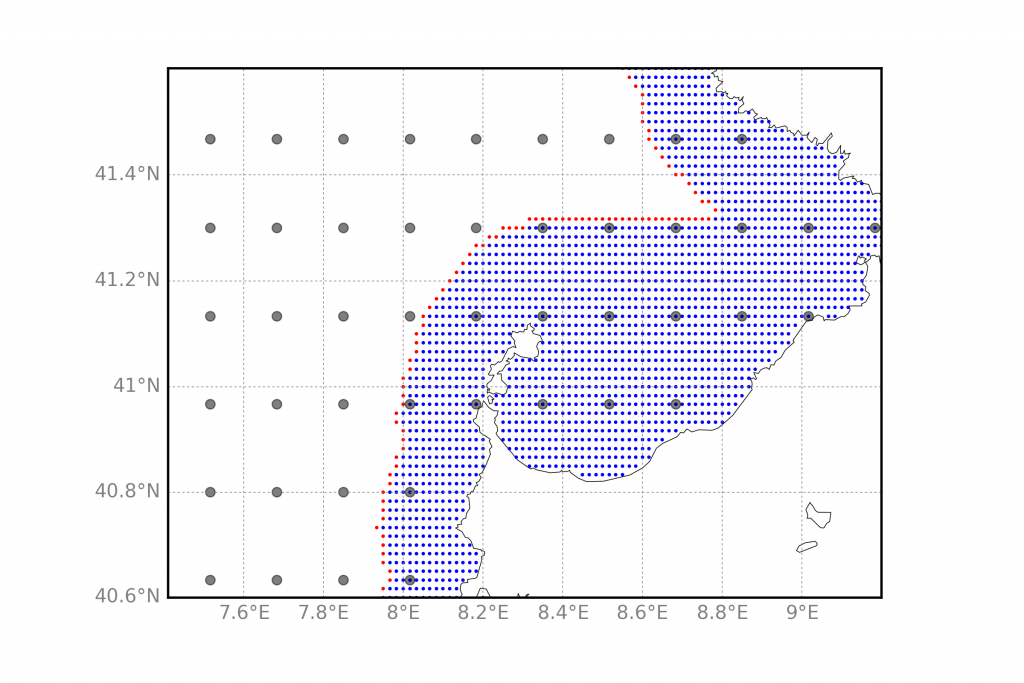 Figure 1. Coarse and fine grids. Grey circles represent the sea cells of the coarse grid. Blue and red dots represent, respectively, the sea and boundary cells of the fine grid. The vertical and horizontal dashed grey lines are the meridians and parallels. The solid line is the shoreline.

The Linear Wave Calculator uses linear wave theory principles to compute the mean wave parameters of a sea state at a reference point offshore of the surf zone. Given the input parameters, it allows the calculation of output wave parameters providing that several assumptions are satisfied. The most important assumption to be met is the small wave amplitude assumption that requires that the wave amplitude must be small in comparison to the wave length. The core of the linear wave theory is the dispersion relationship that relates water depth, wave length and wave period. In the Linear Wave Calculator, the dispersion relationship is used to obtain the wave length starting with known water depth and wave period. Due to its simplicity, the wave theory is nowadays widely used by engineers and scientists.

The Surf Wave Calculator propagates the sea state from a reference point offshore of the surf zone up to the breaking point. It combines linear wave theory and energy conservation principles with a depth-induced wave breaking formulation. First of all, the wave energy spectrum representing an irregular sea state is obtained from the significant wave height, peak wave period and mean wave direction at a specified water depth. Then, assuming a longshore-uniform beach characterized by an equilibrium profile (Dean 1977), each spectral component is propagated towards the shore neglecting any energy dissipation process. During the propagation outside the surf zone, each wave component keeps the frequency and the energy flux unaltered. On the other hand, the wave height and wave length are modified by shoaling and refraction, whereas the direction is modified by refraction alone. By reconstructing the wave energy spectrum from the propagated wave components, it is possible to obtain the significant wave height at any depth over the sloping beach. As the wave field propagates towards shallower depths, this computed significant wave height is compared with the theoretical breaking wave height suggested by the formulation of Kamphuis (1991). If it is smaller, the propagation continues towards shallower depths. The propagation stops where the computed significant wave height coincides with the theoretical breaking wave height. At this water depth, breaking induced dissipation becomes important and the assumption of no energy dissipation fails. 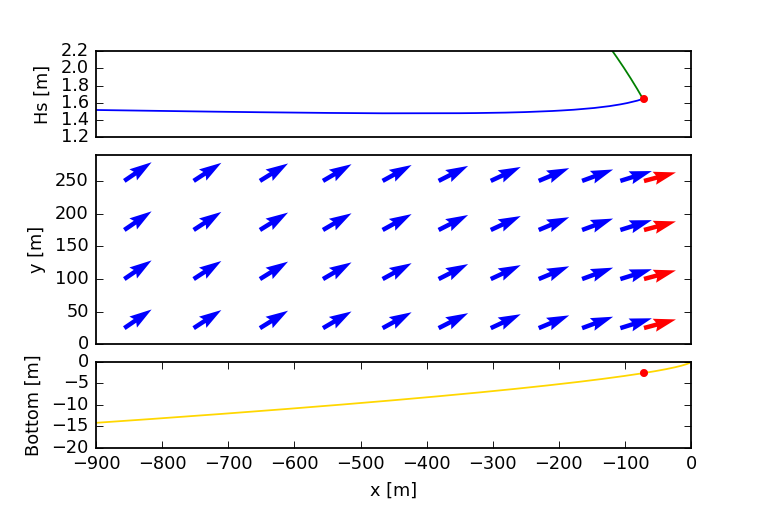 The Wave Generation Calculator computes the mean wave parameters defining a sea state generated by a wind blowing with a specified strength and duration over a sea area. It is based on the JONSWAP approach (Hasselmann et al. 1973) revised by the Shore Protection Manual (1984). Wave height and wave period define the sea state that is the result of a wind that blows with a specified magnitude for a specified duration over a specified generation area (fetch). The SPM approach takes into account the different processes responsible for wave generation and growth and incorporates them into simple equations. The wave growth can be limited by:

In the case that the wind blows over a sufficient fetch for a long duration, the energy dissipation by whitecapping balances the energy input from the wind giving rise to a fully developed sea.