Sea waves are a periodic phenomenon in which wave phases such as crests and troughs relentlessly alternate and repeat during the propagation towards a shore. The wave period can be defined as the time it takes for two consecutive crests to pass through a fixed point. Depending on the wave conditions, this apparently straightforward definition is not so easy to implement. This post tries to clarify some concepts about wave period, the way to calculate it and its implications.

In the last decades, lots of advances in wave dynamics have been achieved by scientists who took advantage of highly-controlled laboratory experiments to reproduce regular wave trains. A regular wave train is perfectly periodic and waves with exactly the same height and shape repeat with period T. Unfortunately, this regularity is not present in natural sea states that are always irregular and chaotic. Natural sea states can be represented by a superposition of a big number of regular wave trains travelling in different directions with different heights and periods. These wave trains are called wave components and together they form the wave spectrum that defines the distribution of energy with respect to frequency and direction. Remember that frequency (measured in Hz or 1/s) is the inverse of period (measured in s). The irregularity of natural sea states leads to the adoption of statistical approaches to define wave parameters such as height and period. The significant wave height Hs is the most common and accepted parameter used to define the representative wave height of an irregular sea state. Almost the totality of wave forecast websites use Hs. However, there is no agreement about the most representative wave period of a sea state. As a consequence, different kinds of wave period can be found on internet. This can be misleading for users.

Together with the wave height, the wave period represents one of the key parameters when it comes to define a sea state. For a given wave height, the larger the period, the more energetic and powerful the swell. In addition, the period plays a crucial role (together with wave height and beach slope) in controlling the wave breaking. Some users may be familiar with the concepts of “mean wave period” and “peak wave period”. They are the most common ways to identify the representative period of a sea state. Their mathematical definitions can be found here. The basic difference is that whereas the peak period Tp corresponds with the period of the most energetic wave component, the mean period Tm is calculated as an average from the whole ensemble of wave components. In other words, only the most energetic component defines the Tp, but every single component contributes to the Tm. Let’s make a practical example to clarify this concept. 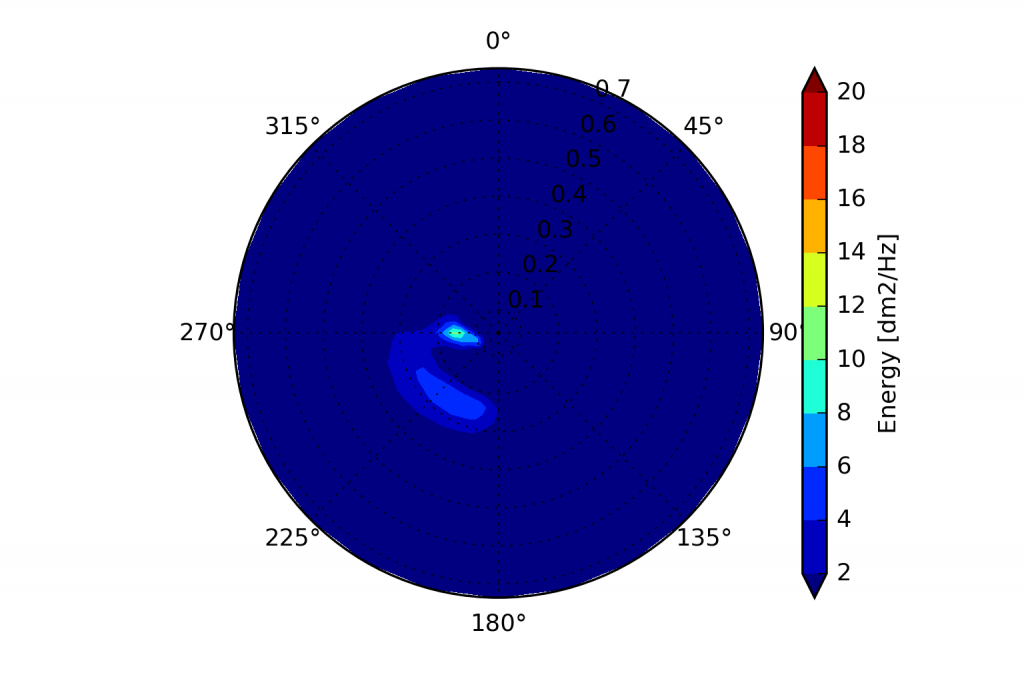 Figure 1 shows the polar plot of the directional wave spectrum predicted on Saturday 23/07/2016 at 12:00 in front of the town of Alghero. From this information it is possible to obtain all wave parameters: significant wave height, mean wave period, peak wave period, mean wave direction, directional spread, energy flux, etc… Frequency and direction are the two dimensions of the spectrum. In figure 1, frequency is represented on the radial coordinate: the larger the distance from the origin, the higher the frequency. The same spectrum can be plotted in cartesian coordinates as it is done in the left panel of figure 2. So, figure 1 and the left panel of figure 2 are different representations of the same thing. It is possible to see in these figures that wave energy proceeds from the directions comprised between 180° and 300°. There are two main bumps: one is located at around 270° and 0.15 Hz (7 s), the other is at around 220° and 0.24 Hz (4.2 s). The first bump is related to swell waves that enter the Alghero Gulf and are refracted by the bathymetry; whereas the second bump is due to wind-forced waves at relatively high frequencies (low periods). At this point, it is possible to simplify a little bit by integrating the spectrum along the direction dimension, or, in other words, by summing the energy of the components that have the same frequency. By doing this, we obtain the non-directional spectrum shown in the right panel of figure 2. Note that the left and right panels of figure 2 share the same vertical axis (frequency). The nondimensional spectrum defines the distribution of wave energy with respect to frequency only (since the information on direction has been lost). 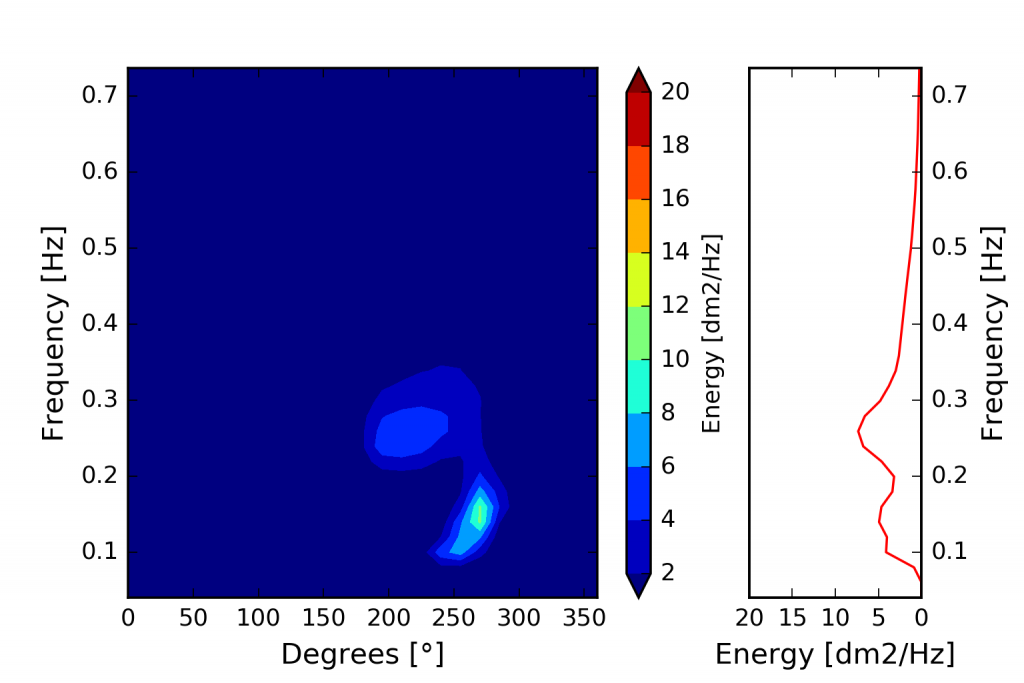 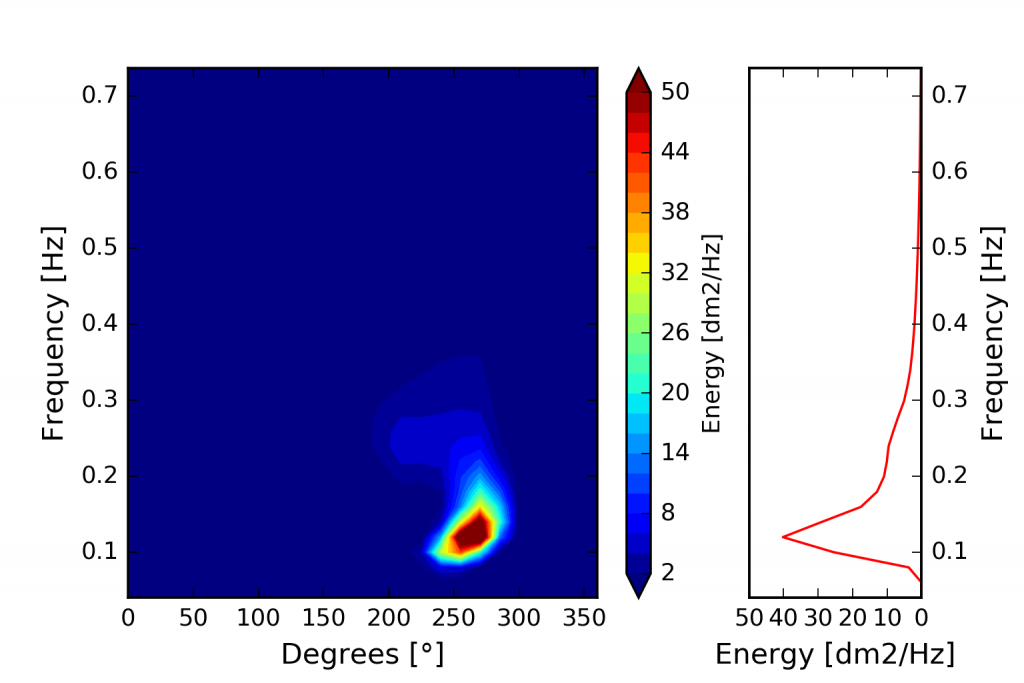 Summing up, in the three hours taken into consideration the increment of the peak period (from 4.2 s to 8.7 s, 107%) was much more pronounced than that one of the mean wave period (from 3.5 s to 5 s, 43%). This is not unusual. Because the peak period is entirely defined by the most energetic wave component, it can experience sudden and sharp changes; whereas the mean wave period defined by the whole ensemble of wave components evolves more smoothly. However, the peak period is largely used and lots of practical formulations employ it since, especially in the nearshore, wave processes are mainly driven by the most energetic component. For instance, in the case of a sea state composed by different incoming swells, the breaking process mainly depends on the primary swell whereas the presence of secondary and less energetic swell waves plays just a minor role, like a noise. This is the reason why the surfSpots section of Swellbeat, that deals with the propagation of waves up to the breakpoint, displays the peak period Tp instead of the mean period Tm.

A final question could be: what is the relationship between mean and peak period? It is well accepted that for fully developed swells, the peak period is larger than the mean period. Wave records suggest that it can be about 15-20% larger. However this relationship can dramatically change especially in those cases in which the sea state is the result of the combination of different swells and wind waves.

One thought on “Mean and peak wave periods”