In July 2011 I decided to visit a friend from college, FIlippo Biancu, who had established himself in Rivas Province, Nicaragua. He has owned a surf guesthouse called Club del Surf for over 10 years. It sits directly in front of the surf break of Popoyo. Popoyo is an amazing wave: a world class hollow A-frame breaking over a reef. The left breaks longer and hollower than the right, that, depending on the swell angle, can mutate into a freight train with incredibly steep take off. 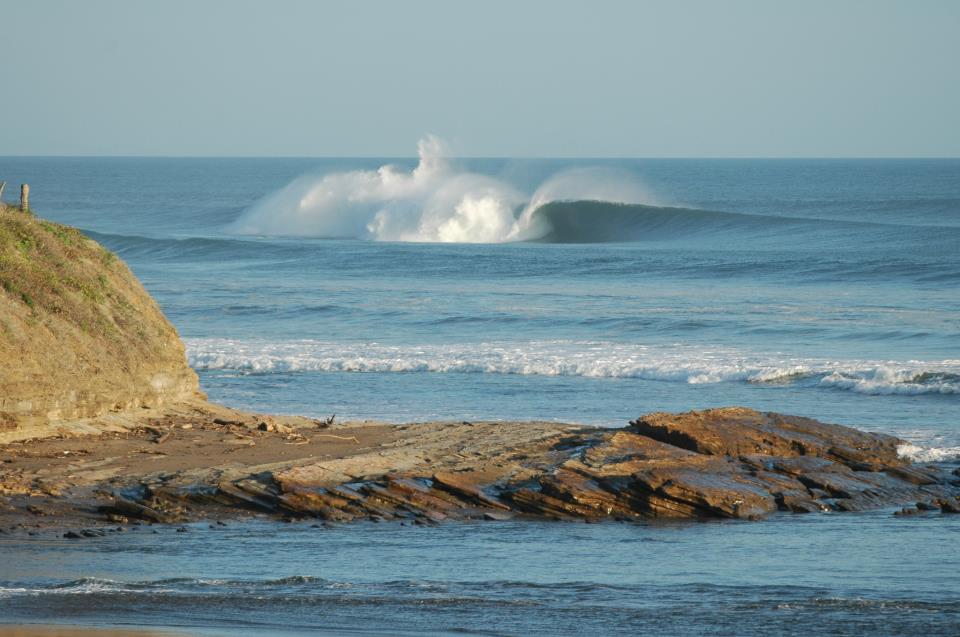 Prior to my visit to Nica, I surfed the Atlantic Ocean many times and dobbled in Indonesian waves twice. Popoyo was my introduction to the Pacific Ocean. So I was really curious and wanted to challenge myself. For the first 3 days at Popoyo I surfed shoulder high wind-generated swell. On fourth day it changed. A 1m @ 18 sec ground swell hit directly the beach break nearby but with an onshore wind. I could feel that something powerful was stirring in the Pacific. I just wasn’t aware of the full extent of the force that was coming….

That evening, talking with other surfers about the forecast, everyone was excited about a swell of 6 ft@ 18s scheduled to hit the next day. I had never in my life surfed a solid swell with an 18 seconds period. In my ignorance I thought that next day was going to be an enjoyable surfing day. Probably an excellent long period wave, but not that challenging. Maybe head high or little over head, I guessed. I was wrong. Horribly wrong.

The next day Popoyo was firing. The Pacific Ocean had woken up and was showing a force that I had never experienced before as a Mediterranean surfer. Some sets had solid 10-foot face on the take-offs and the barrels were spitting from both sides. I don’t know why but I had the brilliant idea to get into the water anyway.

While I was paddling out I glimpsed, at about 200m beyond the main break, the Popoyo Outer Reef was producing a 20 ft+ barrel. At this point I started to shiver with fear. While sitting in the take off area I remember the feeling of the mass of water passing below me, pushing me up and down on the surface of the Ocean with an amplitude never experienced before. The Ocean was breathing so deeply that I was hypnotized and… paralyzed. My muscles stopped working and my brain felt like it was shutting down. I felt myself slipping into a nightmare that I couldn’t wake up from. All that I accomplished was missing the take-off on one of the smallest waves of the day: 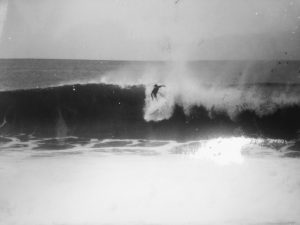 July 2011: myself going south at Popoyo

The wipeout itself surprisingly had little consequence. I managed to penetrate on my fall and came up in 4 seconds.

But I was not confident bobbing around in the moving, swirling amount of water that surged around me. It was terrible unnerving. I spotted in the distance the big wave legend Garrett Mcnamara cruising with his SUP between the break of Popoyo and its monstrous Outer reef. While I continued to feel rattled, he was chilling out.

I finished the session by doing the paddle of shame back to the shore. Turning my head I saw an unknown daredevil getting shaded within a turquoise cylinder. I felt genuinely happy for him. I had learned my lesson and I was grateful to end up without any injury, just a bruised ego.

The physics behind the tale (alert: this might be interesting)

Here I would love to give you an idea of how much water is actually container in a swell by comparing a Pacific swell of 6ft@18s with a solid Mediterranean swell of 6ft@9s, using the powerful tool that Swellbeat provides to its fans, the Wave Calculator:

I use the Linear Wave Calculator that gives the “wave parameters of a sea state at a reference point offshore of the surf zone” to calculate the volume of water that moves between the wave trough and the crest. Let’s consider a linear front wave of 1m, at the depth of 100m, for both swells: 2m@18s and 2m@9s.

Now please open the Swellbeat Wave Calculator in a window beside: you there? In the Linear Wave Calculator enter 2m as height, 18 sec as period and 100 m as depth, you get a wave length of 353.4m. Now leave everything unchanged but the period: 9 sec; you get 93.53 m wave length. Because shoaling waves (waves that are moving from deep water to shallow water) tend to morph from sinusoidal shape to triangular shape, we can easily calculate the surface of the cross section {(base x height)/2} and then get the volume:

Can you spot the difference?!? A 6ft high wave at 18 sec contains almost 4 times the amount of water than a wave of the same height but half the period. Terrifying, isn’t it?

Keep in mind that these volumes reduce considerably when the wave pass from deep water to shallow water (called shoaling). When the wave actually breaks its wavelength can be 1/6 of the values above. Not all its energy translates to a mass of water as heavy as a small car falling on your head.

Check the hand sketch to have a summary:

When the swell approaches shallow water things become complicated. Wavelength gets shorter (can play with the Wave Calculator entering smaller depths). The wave loses its symmetry (the face of the wave becomes steeper than its back) and the list goes on. Then, when the wave finally breaks all the energy of the Ocean is unleashed. However, it is difficult to calculate how much water breaking waves project forward.

The pressure exerted by a breaking wave can swing from 250 to 6000 lbs per square foot (1220 kg/m2 to 30.000 kg/m2), according to the size of the wave. A practical example: a plunging wave of intermediate size, breaking on a person, could give the same feeling of being hit by that Ford Fiesta. And wiping out on a large long period wave, can feel like being hit by a fully loaded truck.

Remember: one cubic meter of water weighs one ton. It’s something to be aware of, if one day you decide to break out from your comfort zone.

We would love to hear your opinion on this topic, please leave a comment below!