As marine sports-people, we regularly check specialized websites to have a clue about the evolution of sea conditions in the next days. Nowadays, almost all the wave forecasts available are based on spectral wave models (https://en.wikipedia.org/wiki/Wind_wave_model). The final product provided by websites is made up of relevant parameters: for instance wave height, period and direction. They allow the characterization of sea states and thus the quality of waves depending on our favorite sport. All these parameters are spectral parameters meaning that they are obtained from the wave spectrum. Due to the importance of the wave spectrum, it is worth to give some basic concepts that can help in the understanding what is beyond those parameters and numbers.

We know that the wave motion we find in the sea is irregular, meaning that each individual wave is different from the previous and the following one. This yields the impossibility of defining a unique wave height (or any other parameter) and complicates the description of the sea state and thus the wave motion. Nevertheless, we can think an irregular and chaotic sea state as the superposition of a large number of regular wave trains.

In a regular wave train, each individual wave is identical to the previous and to the following one. We can reproduce a regular wave train in a laboratory experiment but it does not exist in nature. For each wave train, waves repeat again and again, and we can easily identify the wave parameters: wave height, wave period and wave direction. Thus, given a natural and random sea state (for instance measured by a wave buoy), we can apply mathematical techniques to isolate and identify the wave trains, also called wave packets, that constitute it. That is a wave spectrum: the ensemble of the wave packets that, once superposed, define the random sea state.

At this point we have defined the frequency-direction domain in which we expect to find wave energy. The spectrum tells us exactly that: which packets carry energy and which do not. Good! Now there are two main approaches to obtain the wave spectrum depending on our input data. In the first approach we start with a measurement from a buoy (for instance the time series of the vertical sea surface displacement). Then we apply those mathematical techniques I mentioned before to obtain the spectrum. The second approach relies on numerical models. We start with wind data (usually the output of a meteorological model) and the wave model simulate which wave packets gain energy from the wind and how this wave energy is then redistributed among wave packets. Both approaches give a spectrum as a result. The first is a measured spectrum and the second is simulated spectrum.

Wave spectrum from the SWELLBEAT model

Let’s make two examples to clarify the concept. Figure 1 shows the wave spectrum simulated at the virtual buoy in front of Porto Ferro (Sardinia) on the 17/11/2020. This is the output of the wave model. On the left we find the wave parameters calculated from the spectrum. This is what we usually find on websites, see for instance https://swellbeat.com/forecast/spots/porto-ferro-wave-forecast/. The spectrum resembles a “bump” of energy concentrated between 270° and 315°, in fact the mean wave direction is 290.9°. The height of the bump is proportional to the significant wave height (1.4m). Whereas the distance of the peak of the bump from the origin of the plot is the peak frequency (0.12 Hz, or its inverse the peak period = 8.4s). We see that apart from that main bump, there is only white in the plot. This means that all the wave energy is concentrated around the main direction and peak frequency: this is a clean swell.

The right panel of the figure shows the evolution of free surface obtained as a sum of the wave packets from the spectrum. Of course this is not deterministic, we can only guess how it looks like. Not the exact sequence of high and small waves. In the panel we see the front of waves moving from West-North-West 290°.

In figure 2 we see the wave spectrum simulated at the virtual buoy in front of Porto Ferro (Sardinia) few days later, the 21/11/2020. The wave parameters are not so different from the previous figure. However the spectrum looks different. In fact, there is a secondary bump of energy around 45°. This is due to short waves locally generated by the strong North-East wind that was blowing that day. In the “Wave motion” plot on the right we clearly see that superposed to the long waves traveling from West-North-West there are small waves (ripples) traveling from North-East. Those wind-generated ripples were not present in the figure 1 since that day there was no wind. 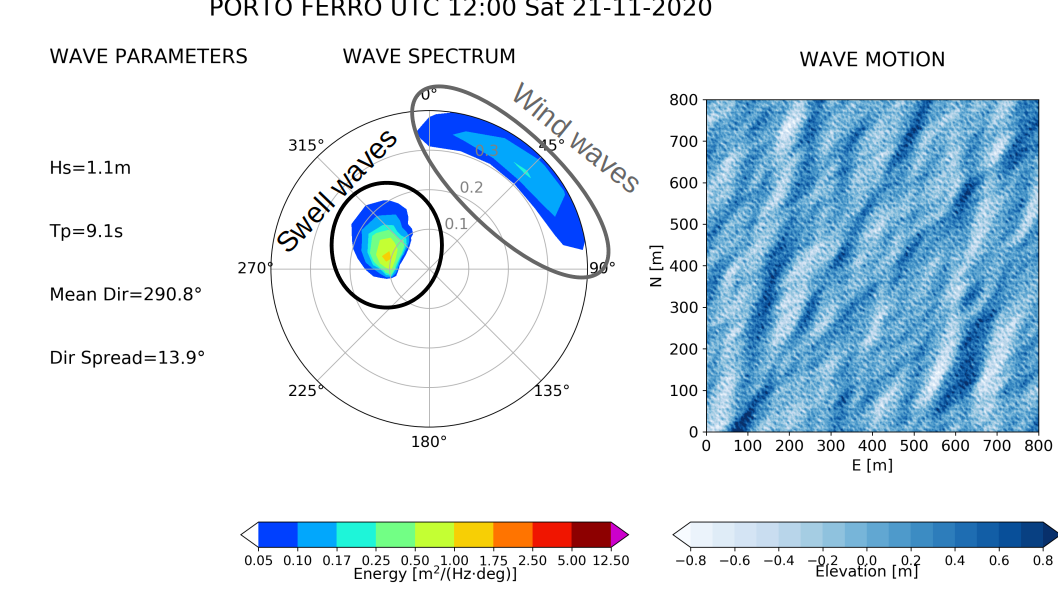 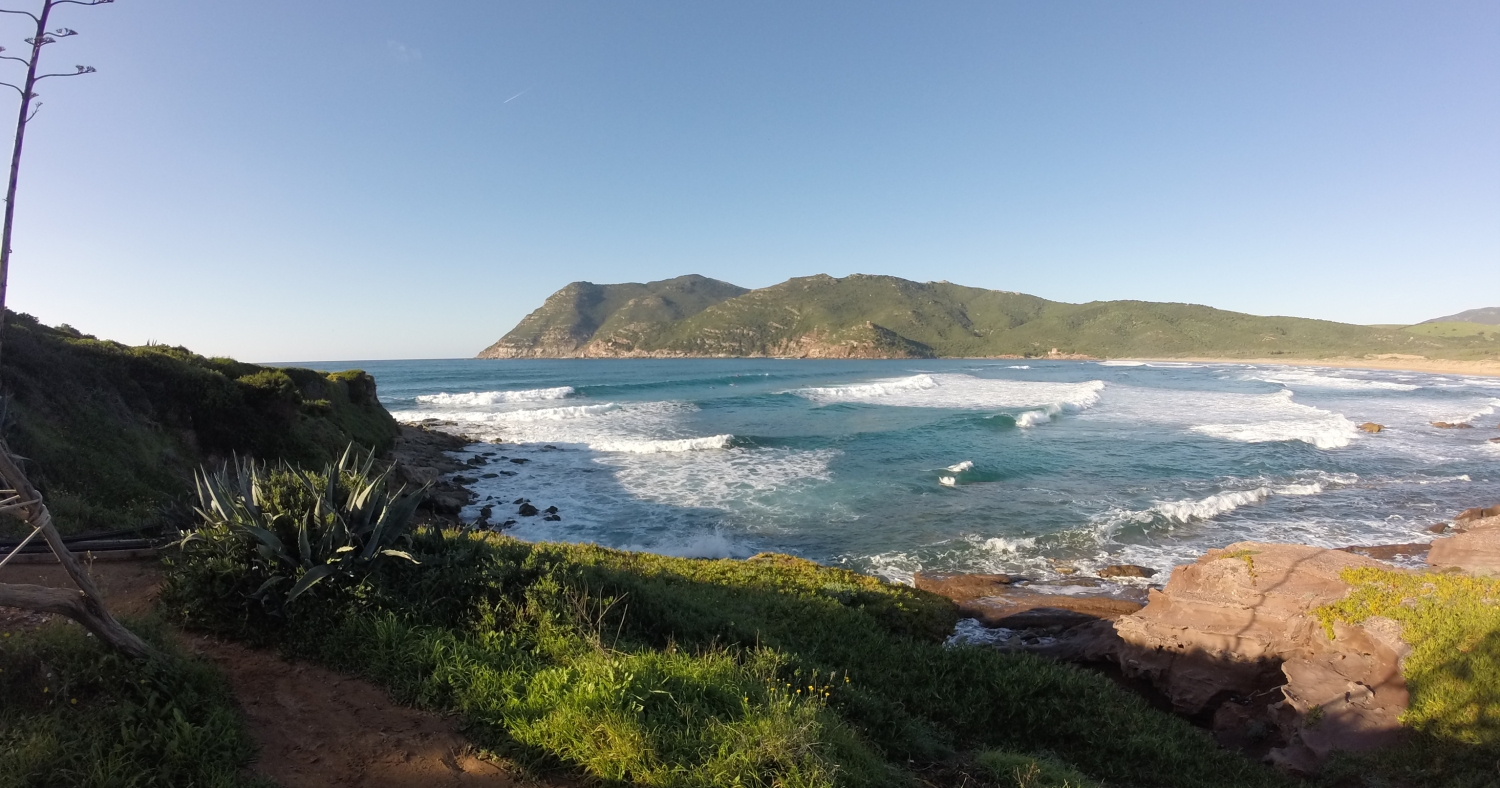