Does Surfing affect global warming in positive or negative way?

The 2019 climate talks in Madrid have ended last sunday, december 15th, with some partial agreements. The conclusion was a request to all countries to increase their efforts to cut CO2 emissions to meet the terms of Paris 2015 agreement.

The point of conflict between developing and developed counties is still standing. Generally speaking developed countries are more willing to cut their emissions having already reached a substantial grade of wealth. While developing countries claim that first they need to grow economically before being able to reduce their greenhouses gas emissions. Unfortunately the most polluting countries in the world are not poor nations at all, as you well know. They would have all the power to really make the difference, but the argument is too vast to be treated here.

The big quest is: are we on time yet to stop the global warming? What can we do as surfers and ocean lovers to give our contribution to save our planet?

Nobody can deny that, we love to move around. Very few surfers in the world have the chance to live in front of the spot. For all others is a constant check of wave forecast waiting for the right day. Then it’s all about packing all your gear in a car/airplane and go. That’s not actually a really sustainable and environmental friendly attitude. However especially when you are young is difficult to stay calm in front of the picture of an epic day. You only want to get there.

Surfers that are born and live far from the sea normally operate two kind of choice in their life:

The category 1 is composed by travellers, those with the heaviest emission footprint. I couldn’t blame them at all. Who can blame a surfer for his/her desire to experience new waves? All of us at least once in life got this satisfaction. Up to 20 years ago was a mission for the category 1 to score epic waves. Any surf trip to the ocean was uncertain and the success depended on personal experience, knowledge of weather conditions… and lot of luck. This uncertainty ended with the come of Internet and the development of wave forecast website.

The role of modern forecast tools

Swellbeat and other wave forecast websites play a big role in making us save gasoline and time. The arrival of the Internet and the more precise mathematical models led to the birth of websites specialized in wave forecast. They allow users to check the wave trend for the following 4~7 days giving the possibility to plan the trip to the ocean reducing waste of time. Moreover they considerably lowered the rate of fails. The step forward was huge.

Imagine if tomorrow internet would cease to exist. How would you know if there are good waves on next weekend? We would need to go back to watching the clouds and cross fingers. It would not be funny. And this is not gonna happen: wave forecast will only get better.

Surfers love travelling and love to be in the water too. I love surfing and, if I have to confess, Ocean more than surfing. Just because surfing without Ocean would not exist. So I make a scale of priorities.

By searching on the Internet for articles about surfing in relation with climate change was interesting to find out that 15-10 years ago climate change was seen as something positive. Indeed a warmer Ocean produce stronger storm and bigger waves, but at very high cost. When a powerful storm generates a groundswell that hits a coastline thousands of miles away, probably somewhere else same storm brought destruction and put at risk the life of thousands of people.

An article of Surfer of 2010 was picturing global warming as something good for surfing, on the base of  that warmer Ocean means bigger waves.

Another contraddictory article of 2017 of Mike Pearl on Vice, the famous American Media, reports a phrase of John Weber, the Surfrider Foundation’s Mid-Atlantic regional manager that left me speechless.

He stated that would be a plus to surf  on a dead coral reef because there would be no sealife and so no sharks around. I would say that I disagree with such opinion. Dan Reineman, a lecturer at Stanford University’s School of Earth, Energy and Environmental Sciences, and a lifelong surfer, luckily gives different opinion:

Long distance Flight yes or no?

One huge contribution to the growth of surfing on a global scale was the come of the low cost flight. In the first decade of 21st century Air companies started to offer flight at the price of a meal. A revolution “took off”: flying to Canary Island, France, Portugal, Morocco became suddenly affordable for many European surfers. Surf trips to remote locations like Indonesia, Philippines, Hawaii, South Africa etc. were not dreams anymore. The surf industry and tourism boomed and so the related CO2 bill.

A round trip flight Rome-Denpasar (12h flight per route) produces 1 tonne of CO2 per passenger, which is comparable to the CO2 produced by one SUV running for about 1500 miles/month each. To make a compare, if you are a surfer who lives at 35 miles from your home break (roundtrip 70 miles), it takes twenty roundtrips to the sea to reach the CO2 emission level equivalent to that attributable to a single passenger on a roundtrip intercontinental flight.

There are on average 1500 intercontinental flights every day. Therefore in the atmosphere are released between 216000 and 487500 tons of CO2/day. Intercontinetal flights affect CO2 emission like if we add 12 ~ 25 million more cars on the road every single day. This is the number of cars of countries like Spain of Australia that move all together, everyday and with increasing rate. Ok,ok, not all the travellers around the world are surfers. We are only a fraction of the total, but we are the category with the biggest interest of all to protect Ocean environment.

A good compromise could be trying to fly closer instead of going to the other side of the planet. I consider for example an european surfer that wants to go to….Hawaii? No thanks, this winter we go chasing monsters in Lanzarote. You craving for righthand barrels? Morocco is just south of Portugal waiting for you. And if you are blessed by God and you live in the Med…..wintertime is great there too: 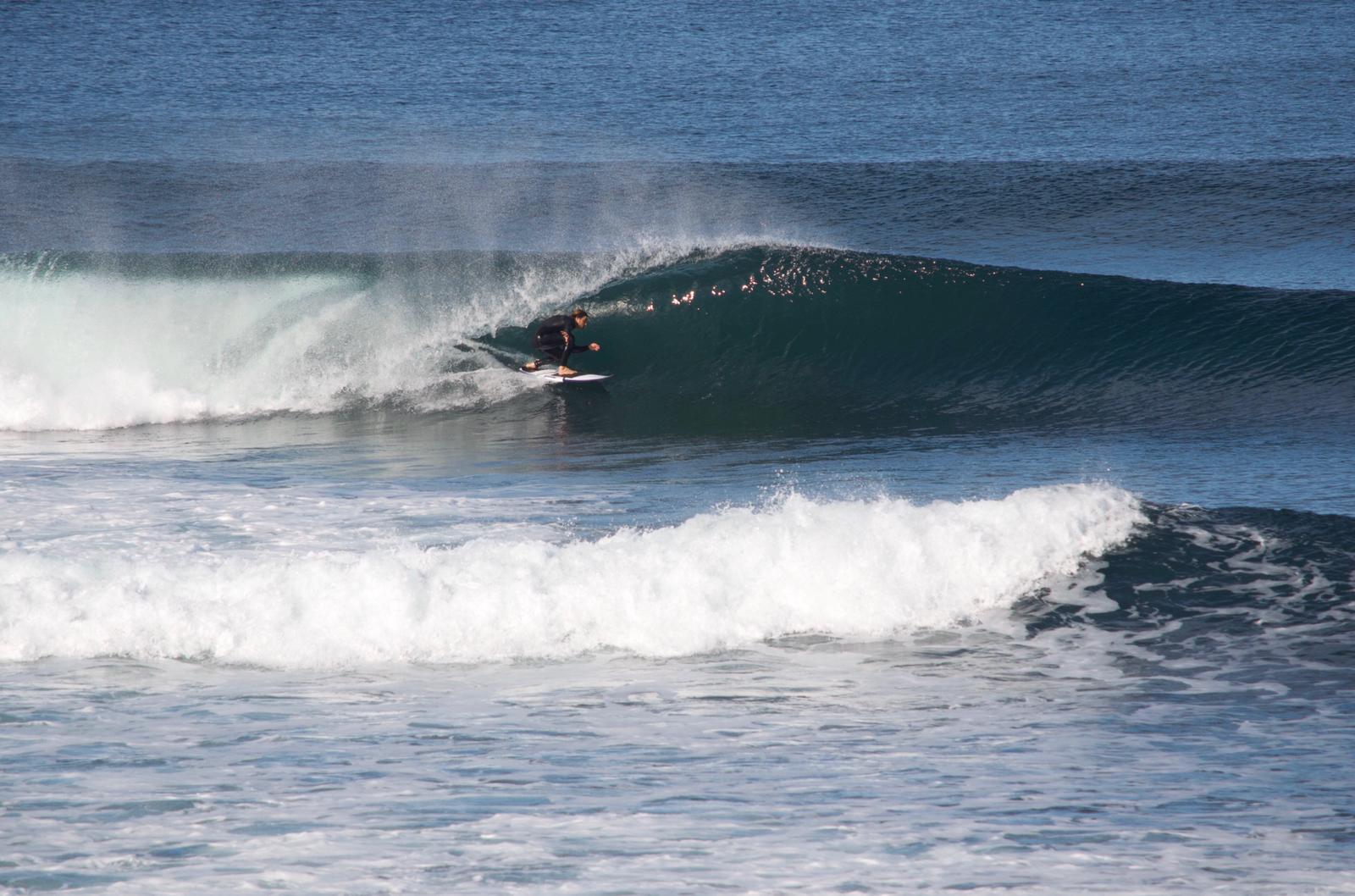 Should we surf only our local beach break?

This is an extreme and probably unpopular decision. Especially if your homebreak sucks and you starving to get decent surf. Likewise we agree that anyone has the right to move as much as he/she desires. The problem is that our mass transportation technology is still based on burning fossil fuel.

So I would ask to anyone reading this article “How much would I sacrifice my travelling, my ego, to allow the next generations to enjoy what I enjoy today?” 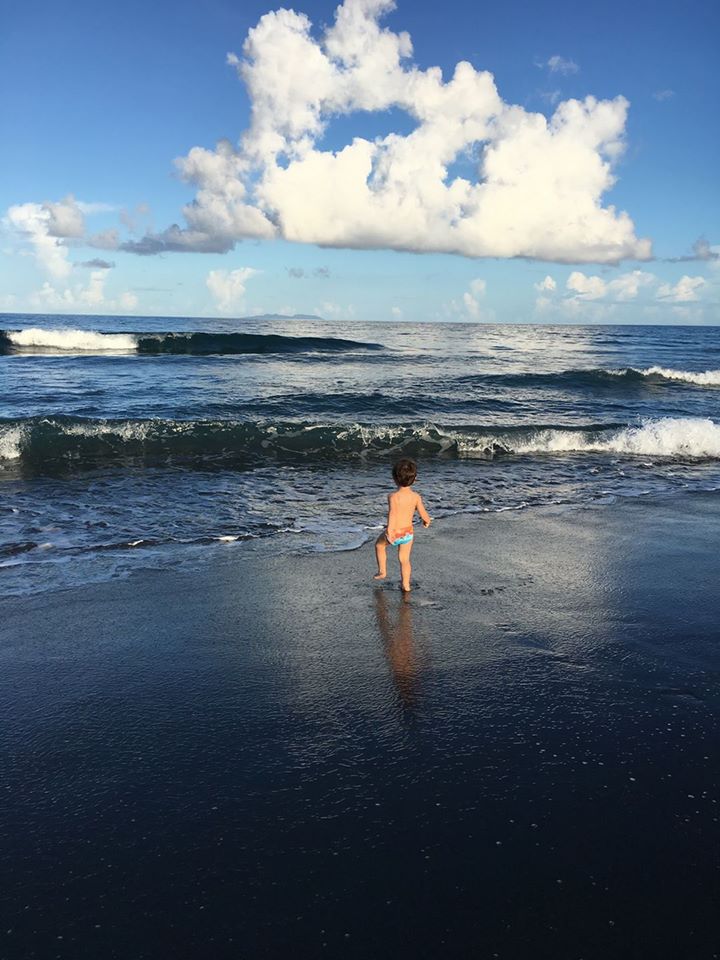 next generation at the beach – how many more will enjoy this beauty?

If your are lucky to live nearby a coastline with epic waves you might find your inspiration by reading about Fergal Smith, the irish surfer and farmer who decided not to travel to not hurt our planet. Fergal is one of my favorite free surfer around, a super positive dude, stoked about life and a hell of a charger.

Another possible solution which is becoming reality at an unexpected speed is the creation of Surf Wave Pools. Every year a new wave pool arena opens in UK, USA, Australia etc. There are operational wave pools everywhere, from Europe to Asia and Australia. Although wave pools are in contrast with the spirit of surfing that has a big component of discovery, I believe in the future wave pools will become more and more popular.

Global warming is probably the biggest challenge of our time. It is the first time that humanity has to face such a big enemy. That kind of enemy that takes a global effort from each of us to be gone. As a result it cannot be defeated if all the countries but one escapes from the duty to reduce its emission.

As expected in any great battle there are big heroes: Greta Thunberg at the edge, Alex and Andrews at 4Ocean, Jean Jaques Cousteau, as eternal legend for pioneering marine protection, just to name a few. These guys and many others that do their daily job to save the planet are the Earth’s Savers. They are people like you and me, and we have the same power and duty to turn earth in a better place.

Surfing for its very nature goes against climate change. Surfers always draw attention towards Marine environment and its protection. Sometimes we do behave in contradictory way but if we do so it’s without intentino to harm nature. I believe without surfers the situation would be much much worse for our big blue friend. The proof consists in having a look at surfers that created many no profit associations. Today some of these associations are the first line in the battle for cleaning up the seas and sensibilize the public opinion to act in help of the Ocean.

May this Christmas brings you the best wave of the year, Merry Christmas from Swellbeat!