Even though wave models have become more and more robust and reliable, comparison between model results and data measurements is still a crucial task that no wave modeller can overlook. Here, the SWELLBEAT model data proceeding from the WW3 simulation started on the 13/06/2016 are compared with the wind and wave data measured by the Lion Buoy located in the open sea south of the Gulf of Lion (N 42.06, E 4.64). This specific simulation has been chosen because during the time period covered by the computation strong Mistral winds raised considerable waves in the Western Mediterranean basin and in particular in the proximity of the Lion buoy location. The buoy is moored in deep waters (depth is 2300 m) and it is equipped to measure atmospheric and oceanic data. Here we are interested in wind speed and significant wave height. 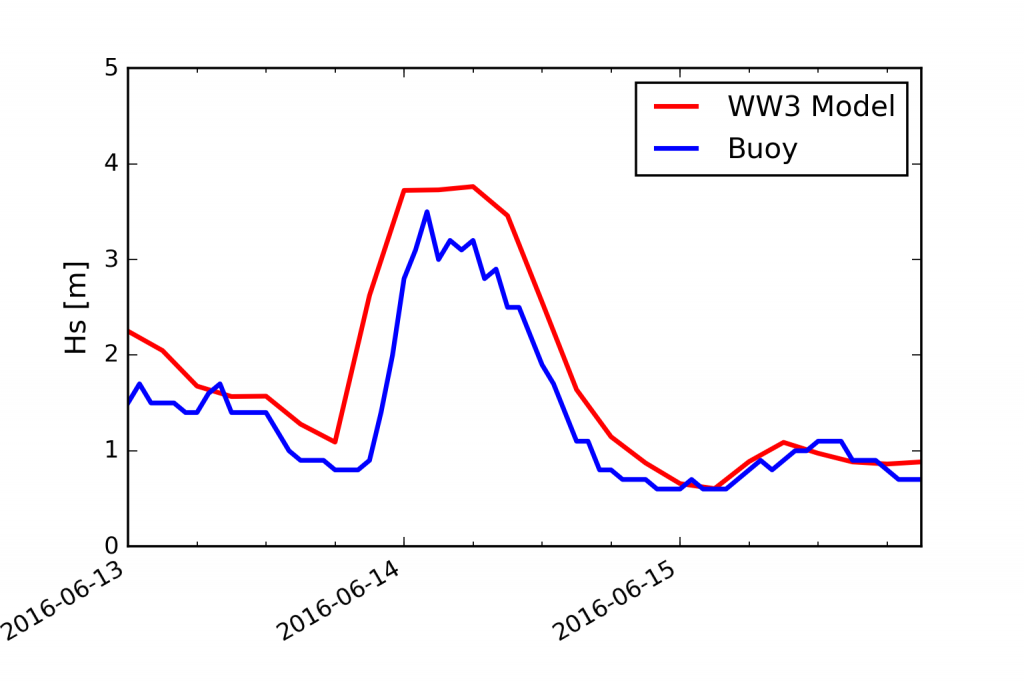 Figure 1 shows the comparison between the computed (red line) and measured (blue line) significant wave height Hs at the buoy location. On average, the simulation gives a Hs which is 27% larger than that measured by the buoy. At the peak of the storm, the computed Hs takes values slightly larger than 3.7 m between the 00:00 and the 06:00 of the 14/06; whereas the maximum Hs recorded by the buoy is 3.5 m and occurs at 02:00 of the 14/06. Surprisingly, the performance of the simulation (in terms of agreement with measurements) is better at the end (the evening of the 15/06) than at the beginning (the morning of the 13/06) of the simulation. This result corroborates the idea that, with the chosen simulation length of three days, the wave forecast accuracy is not reduced at the end of the simulation. Let’s try now to identify the possible causes that can explain the observed 27% wave overestimation.

First of all, the procedures to estimate Hs from computed and measured data are different. In other words, we are not comparing exactly the same thing. The WW3 model is a wave-averaged model, meaning that it does not compute individual waves with crests and troughs (it would be infeasible to cover large spatial domains), and Hs is calculated from the wave energy of the sea state (it is called zeroth-order moment wave height). The buoy, on the contrary, provides individual wave series from which the Hs can be obtained with a simple statistical method. Under clean swells, the two methods converge providing almost equal Hs values (see the support page). However, under stormy conditions, Hs calculated from the energy of the sea state can differ from the Hs calculated from individual waves. How much? Let’s say that it is likely be few percent larger (about 5-10%). So, this can only partially explain the wave overestimation. There must be something else. 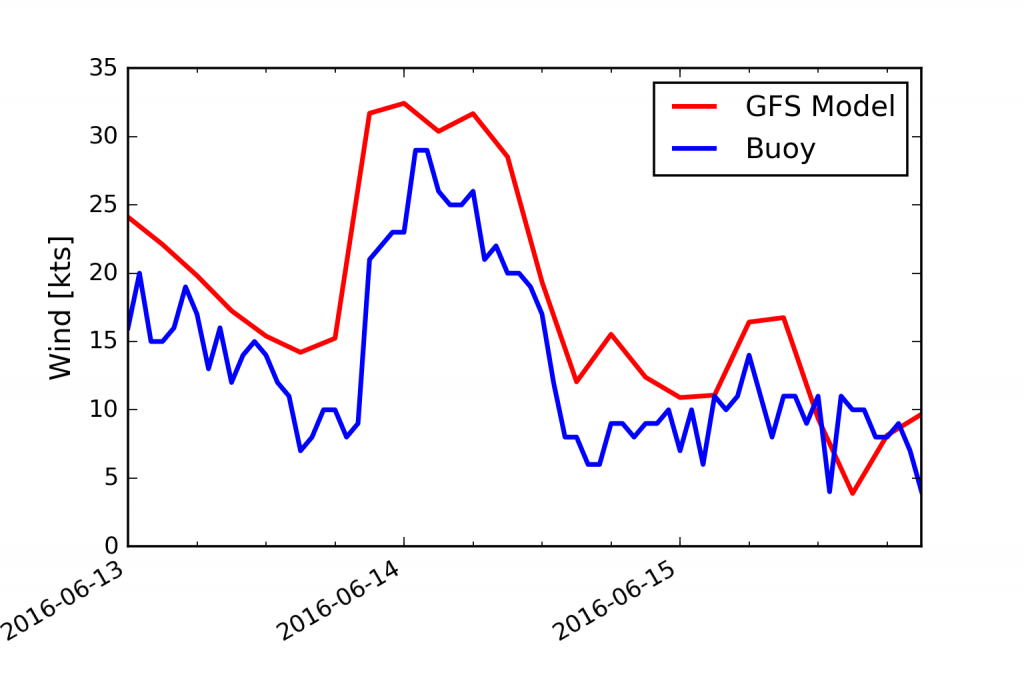 It is worth to recall that the WW3 model takes the winds computed by an atmospheric model (the GFS in this case) as input. So, the accuracy of the wave model relies upon the accuracy of the atmospheric model. Figure 2 shows the comparison between the computed (red line) and measured (blue line) wind speed at the buoy location. On average, the GFS simulation gives a wind speed which is 33% larger than that measured by the buoy. Again, we are not comparing exactly the same thing (sorry for that), since the model computes the wind at an elevation of 10 m and the buoy measures it at an elevation around 5 m. At the moment we don’t know the exact elevation at which the buoy is recording, so we can not include corrections for that. However, the difference in elevation can hardly explain the observed 33% discrepancy in magnitude. We can state that, the wind speed at the buoy location has been overestimated by the GFS model.

Resumé. During the storm that occurred between the 13/06/2016 and the 15/06/2016, the WW3 model provided a significant wave height Hs that was on average 27% larger than that measured by the buoy. This overestimation seems to be largely caused by a overestimation of the wind speed predicted by the GFS model in the proximity of the buoy location. Other possible causes, such as the difference between the Hs calculation methods, are likely to play a secondary role. More validations will be provided in the next future.